XRPD For The Identification of Counterfeit Drugs

Reprint. Original can be found here.
The patent disclosing methodology to study counterfeits with XRPD is accessible here.

World Health Organization statistics indicate that 30% of medicines supplied in developing countries are fake; in some Eastern European countries the proportion is 10%. With reductions in trade barriers and the emergence of an increasing number of internet pharmacies, this has become a massive and growing global problem. The annual earnings from counterfeit drugs are estimated to be between 20 and 50 billion USD.

While the source of the counterfeiting problem must be addressed with economic and regulatory measures, it is also important to look at methods that aid discrimination of fake drugs from real ones. X-ray powder diffraction (XRPD) has become a key analytical technique in the pharmaceutical industry and is being used for the discovery, development and manufacture of drugs. Here we will demonstrate that XRPD also allows the effective, quick and reliable screening of pharmaceutical tablets without removing them from their original blister packing.

X-ray diffraction measurements were carried out using an X’Pert PRO MPD diffractometer equipped with a focusing mirror and motorized highthroughput stage. The blister cards were mounted on a metal frame and the diffraction signals were measured in transmission mode using an X’Celerator detector. For the commercial products investigated, the original, intact blister cards were used as received, without any sample preparation.

XRPD measurements of tablets through the blister

Figure 1 shows XRPD data from a single commercial tablet in an opaque blister and the signal from the emptied blister. The presence of the packaging material is evidenced mainly by an increased background and by the two Bragg peaks at high angles. This shows that high quality diffraction data can be obtained directly from the intact, blister-packed tablets. In most cases the absorption factor from the blister card was found to be in the range of only 2.5 – 3.5, with the highest value being 5.6. 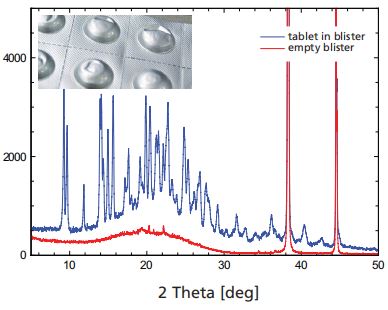 Figure 1: XRPD scan measured from a commercial tablet through a fully opaque blister within 30 minutes. The separately measured emptied blister material does not significantly interfere with the diffraction pattern from the tablet. The two intense peaks observed around 2 Theta of 38˚ and 45˚ are attributed to the aluminum foil.

In order to demonstrate batch homogeneity testing, a whole (3 x 6) blister card was measured in an automated way. The data obtained are given in Figure 2. Measurement time for each tablet was just 10 minutes, allowing the whole blister card to be scanned in 3 hours. Limiting scans to a preselected, narrower angular range in which most of the characteristic diffraction signals should appear can decrease the time further. Direct comparison of the results for the different tablets shows that a few differ in some detail from the others. They exhibit additional or more pronounced peaks that could be related to differences in preferred orientation / particle statistics of one compound, or to differences in composition. No efforts were made here to determine the exact reason for these discrepancies. 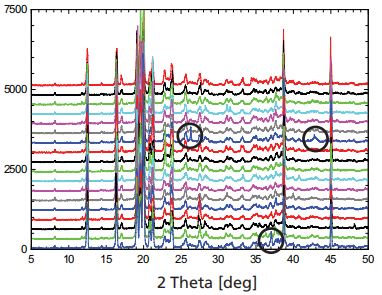 Figure 2: Automated XRPD scans of tablets in a 3 x 6 blister card. The patterns of a few tablets differ from those of the others in showing some additional or significantly more pronounced Bragg peaks (marked with circles). For the sake of clarity, the scans were offset relatively to each other along the intensity axis.

To simulate drugs in which tablets contain different or no API, and also to simulate polymorphic changes during processing or storage, tablets with different compositions were prepared in a blister packaging. Details are given in Table 1. These samples contained 5% Indomethacin (IMC) as the API, and 95% excipient (α-lactose monohydrate and magnesium stearate). Different polymorphs of IMC were used, namely the α- and γ- forms. In addition, one set of tablets was entirely placebo. The tablets were placed in an emptied commercial blister card that was carefully re-closed. Figure 3 shows that the difference in crystal form and/or amount of API is clearly visible through the absence or presence of various diffraction peaks, mainly at diffraction angles below 25˚.

Table 1: Composition of three different test tablets that were used for XRPD measurements through a blister

Figure 3: Left: XRPD data measured from the test tablets (Table 1) through the blister package. The main differences (marked by arrows) are seen at diffraction angles 2Theta below 25˚.
Right: Magnification of the experimental data in the angular range where differences are most evident. The different API in the test tablets is clearly evidenced by the presence or absence of peaks at the angular positions indicated by arrows. 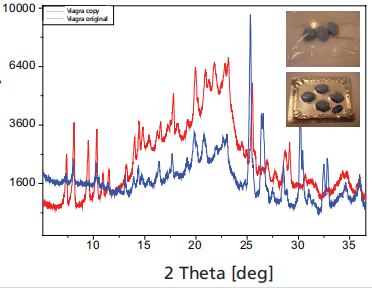 Figure 4: Comparison of the diffraction patterns of an original Viagra tablet (Pfizer) with a copy product. 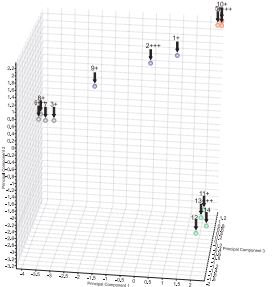 Figure 5 shows the cluster analysis of different original and counterfeit tablets of one product. The green cluster contains the original tablets whereas the other clusters contain fake tablets from different sources.

It was shown that high quality XRPD data of intact pharmaceutical tablets can be obtained without removing them from their original blister packaging. Such measurements can readily be done even through fully opaque blister pack material.

This method can be used to differentiate authentic drugs from counterfeit products, e.g. by checking for the presence of the correct polymorphic form or the comparison of the tablet fingerprint. In addition, non-invasive product control after production or as a function of shelf-life and storage conditions is possible, without needing to open the blister.