The SAXS methodology available at DANNALAB follows the general concepts developed within the beamline communities, particularly at the European Molecular Biology Laboratory (EMBL). Most of the useful information identified by SAXS is related to the higher-order structure, oligomeric state, aggregation pathway and conformational space of flexible systems. An advantage of this method is that it permits the observation of objects that have not been stained or fixed, showing them in their native aqueous environment (in contrast to X-ray crystallography, which generally requires placing the samples in non-physiological environments).

Reconstruction of Higher-Order Structure of Biologics

The atomic structure of biopolymers in a crystalline state is traditionally determined using monocrystal X-ray diffraction. While this is a powerful and well-established approach, a drawback is the necessity of a crystallization step. This step can be a very challenging task for some pharmaceutically -important substances, such as membrane proteins.

The structural properties of a biopolymer in a natural biological environment, such as its higher-order structure, may be investigated using SAXS and often becomes the subject of independent interest. The reason for this is related to the fact that the actual structure of a biopolymer in a solution may differ from its crystalline structure due to its conformational flexibility and tendency to form oligomers or aggregates.

The ab-initio or model-based reconstruction of a low-resolution envelope structure using SAXS may be possible with as little as a 0.25 wt% formulation of the biopolymer in the appropriate buffer - as in the example depicted below:

Investigation of Peptides and Flexible Systems

For peptides with a defined 3D structure in dispersion, the methods of ab -initio reconstruction may be useful for accessing dimensions, oligomeric states and approximate molecular masses - as in the example below: 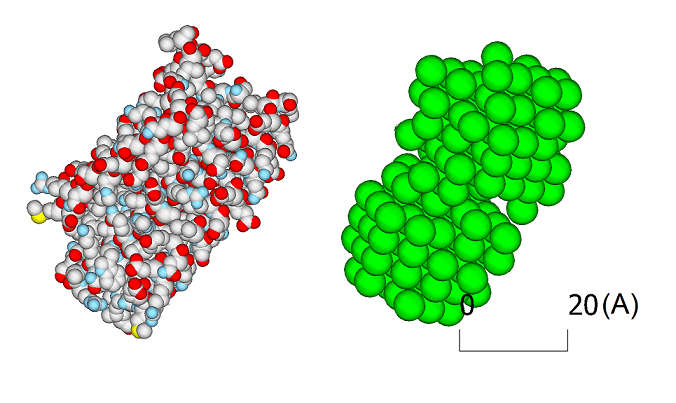 Together with the envelope structure, useful structural invariants, such as radius of gyration and excluded volume, are also determined.

For flexible systems such as naturally unfolded proteins, -we use an alternative approach (following Bernado and co-authors, 2007) where similar to solution NMR, the actual system is presented as an ensemble of the most probable conformations determined by the criterion of best match with the experiment- as in the example below: 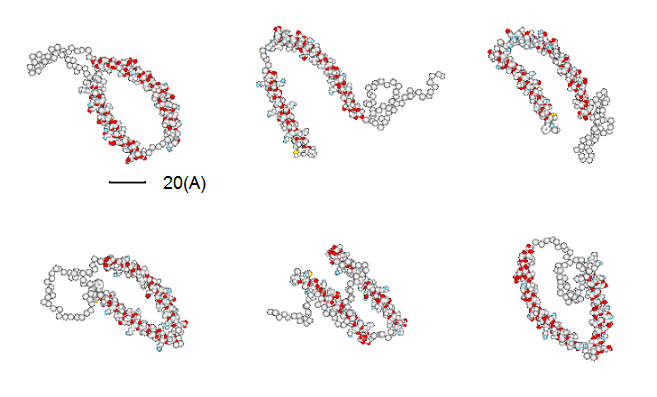 Example 3. Alpha-synuclein is a naturally unfolded protein with two domains (1-60, 61-95) connected by a flexible linker and third flexible domain (96-140). In the experiment, the coexisting conformers of alpha-synuclein in the presence of different concentrations of sodium dodecyl sulphate (SDS -simulating binding to membrane) were investigated by SAXS. As a result, the selected set of conformers (from a collection of thousands) found to be representative of the observed scattering data. The identified conformers were clustered to select a few different co-existing clusters or "types". The members of one of the clusters are shown above, following 3D rotational alignment. The advent of this "U-shape" cluster within the total ensemble of conformers is suspected to be a precursor to alpha-synuclein neurotoxicity. (DANNALAB B.V. ® 2011).

Biological pharmaceutical products are known to be particularly sensitive to environmental factors such as temperature change, oxidation, light and shear. Periodic monitoring of the physico-chemical properties of an intermediate or finished drug substance is required to prove it meets shelf -life specifications.

Information about the structural parameters obtained from the SAXS measurements, such as envelope shape and invariants (mass and radius of gyration), serve as important markers that are correlated with biological activity. If changes are identified over time, it is an indication of the potential degradation of the biological drug product.

Additional information and test cases are available on our SAXS page.